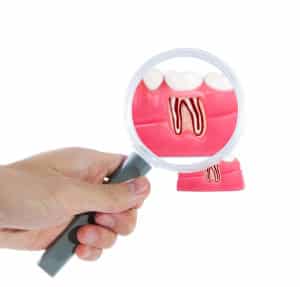 If you’ve ever visited the dentist, or seen a mouthwash commercial, then you’ve probably heard of gum disease and its predecessor, gingivitis. Did you know, though, that the dental condition is one of the most widespread chronic diseases in the nation? As a progressive illness, gum disease affects nearly 80% of adults in America in varying stages, the most severe of which (periodontitis) is the leading cause of adult tooth loss. Despite its destructive power, however, gum disease is highly treatable, although once it develops beyond gingivitis, it is no longer curable.

Hopefully, you’ve done it often enough that brushing and flossing your teeth comes automatically. Unfortunately, that repetition can also cause you to become lax and less diligent, increasing the chances that you might miss a spot or two of plaque without realizing it. Though it may not seem like big deal, that spot of plaque can calcify, or harden, into tartar, making it immune to your toothbrush and dental floss.

As plaque and tartar accumulate along your gum line, the germs that hide inside of them can release toxins that irritate your gum tissue. Some of them may even manipulate your immune system to survive and lead to excessive inflammation of the gingival tissue (gums). When red, swollen, and bleeding gums mark the presence of gingivitis, it is only a matter of time before it progresses to gum disease and threatens the rest of your oral health.

Unlike tooth decay, which directly attacks the structures of your teeth, gum disease targets the structures that support your teeth—gum tissue and jawbone. When left unchecked, severe periodontitis (advanced gum disease) causes your gingival tissue to separate from your teeth and can destroy your soft gums and underlying jawbone. This could eventually lead to the loss of one or more teeth as your smile’s foundation erodes. Some studies even suggest that the mechanisms behind gum disease, mainly the inflammation-causing bacteria, are suspected risk factors for certain major systemic illnesses, including heart disease, respiratory infections, diabetes, and some forms of dementia, among many others.

Safeguard Yourself From Wisdom Teeth

As you grow through adolescence and into adulthood, one last set of molars develops in the back of your jaw. These teeth are evolutionary holdovers from a time when human…

Sleep disorders are a common prevalence for American slumberers. Two of the five most diagnosed of these link directly to the wellness of the throat and the mouth. Bruxism is…

A New Prosthetic Tooth In The New Year

From time to time, we may require the removal of one or more of our teeth. When your existing natural dental material becomes a liability, it can be helpful to…